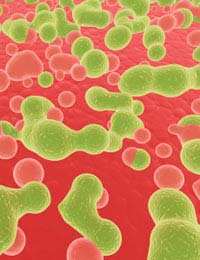 This is a common question that many people ask when faced with a GP who refuses to give them a prescription for antibiotics when they are feeling ill and frustrated with a heavy cold or flu. The public awareness of how antibiotics work and what they can and cannot do is still worryingly low, despite huge amounts of publicity about antibiotic resistance.

How do Antibiotics Work?

Antibiotics are drugs that target bacteria. While some work against some fungal and parasitic infections all antibiotics share one feature: they have no effect on infections caused by viruses. This is a key point.

What is Antibiotic Resistance?

Bacteria, although they are only one cell and have no intelligence, have one characteristic that allows them to challenge the best medical and pharmaceutical innovators who develop new antibiotics. Bacteria grow very fast. They divide every 20 minutes or so when the conditions are ideal. This means that they can evolve at a very rapid rate too. When beaten back by an antibiotic, most bacteria in a population die or stop dividing. Maybe one in a million, however, has a slightly different genetic makeup and has a different pathway and so is not affected by the antibiotic. This single bacterium is not killed, and its division rate continues as normal. In fact, as all of the other bacteria around it die, or stop dividing, it races away because it has less competition.

The result is that within 7 hours there is not one antibiotic resistant bacterium, there are over 20 million.

What makes things worse is that the bacteria that develop antibiotic resistance often have the genes that are responsible for being able to divide in the presence of that antibiotic in a spare bit of DNA called a plasmid. The genes are free in these small stretches of DNA, rather than bound up in their main chromosome. Most people are surprised to learn that bacteria, although they divide and reproduce asexually, actually do engage in a type of sex. Bacterial cells link up with tiny tubes between the cells and pass genetic information. This process of bacterial conjugation leads to the plasmids with the antibiotic resistance genes being shared out with any other bacterium that is nearby. Antibiotic resistance can therefore spread through different populations, even between different bacterial species, very quickly.

What Impact Does Overuse of Antibiotics Have?

The whole problem of antibiotic resistance gets bigger all of the time and does not depend on developing new antibiotics. Bacteria that are resistant to new antibiotics can become global within a few years; once one single bacterium has become resistant; there is no stopping the spread of the gene they carry.

The major factor in speeding up the rate of antibiotic resistance is the number of people who take antibiotics. So, to stop the problem, or at least to limit it, it is important never to take antibiotics unless you really need them.

The next time you are refused antibiotics because you have a virus, take your GP’s advice. It is not a question of money and budgets, although taking antibiotics is really a waste of money if you have a virus. It is a much more serious and wider issue – the more people who take antibiotics for a viral infection, the faster antibiotic resistance can develop. Taking antibiotics unnecessarily is a worldwide problem but one of those things that every individual can do something about.
Next Page