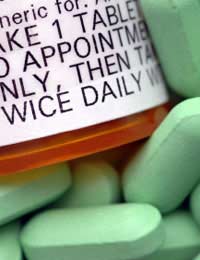 Bacteria are prokaryotic cells. They are regarded as much more basic and more primitive than eukaryotic cells, which make up all higher plants and animals, including humans. Antibiotics act on the cell machinery of bacterial cells, but have little effect on the internal workings of the human body cells because antibiotics are specific for the systems that exclusive to bacteria.

Unfortunately, this does not mean that antibiotics are without side effects – they can cause various adverse reactions, usually in the way that they act on the commensal bacterial populations on the skin, the body openings and in the digestive system. Antibiotics can disrupt the delicate balance of friendly bacteria that normally keep us healthy.

Where Do Antibiotics Come From?

The early antibiotics were the natural products of other microorganisms – fungi or other bacteria. Many of the antibiotics still in use today were originally natural products but all are manufactured today either by chemical synthesis or bioengineering. Newer antibiotics have also been created completely synthetically, usually by altering the chemical structure of an existing, naturally produced antibiotic.

Commonly used antibiotics that most people tend to have heard of include penicillin (the first antibiotic to be discovered and used in the 1940s), streptomycin, tetracycline, cephalosporin and erythromycin. Individual antibiotics work in different ways and researchers are constantly trying to develop new antibiotics and new classes of antibiotics to overcome the growing problem of antibiotic resistance.

Side Effects Of Antibiotics

The common side effects of antibiotics that are taken orally involve disturbances in the digestive system. Antibiotics frequently induce nausea, vomiting and, even more usually, diarrhoea. Antibiotics also kill friendly bacteria that normally help keep the skin, digestive system and genital system healthy. Removing friendly bacteria can provide opportunities for fungi to colonise the free space, which is why antibiotics often cause thrush. This is a fungal infection caused by Candida, and can occur in the mouth as well as in the vagina.

Removing friendly bacteria from the digestive system generally leads to diarrhoea and digestive problems as the bacteria that aid digestion are removed. In elderly people in hospital, antibiotic therapy is known to lead to a dangerous infection with Clostridium difficile, a bacterial species that is usually kept in check by the friendly bacteria. It is tougher than other species, and can overgrow in the digestive system of someone treated with antibiotics, causing intestinal damage, diarrhoea and death.

Less common but more serious adverse effects of antibiotics can also occur. Tetracyclins cause the skin to become more sensitive to sunlight, the cephalosporins can affect the way that blood clots and the aminoglycosides have been known to cause deafness.

The most serious reaction to an antibiotic that anyone can have is a severe allergy. Penicillin allergy is the most common form of allergy (but it is still generally quite rare). For most of those affected, the reaction is fairly mild and involves a rash, some swelling of the tongue and throat or a mild asthma shortly after taking penicillin.

However, a few people suffer anaphylactic shock – an allergy that is so severe that they can stop breathing, and collapse and die. Emergency treatment is required and anyone who has suffered a major reaction to penicillin should carry a medical tag to alert healthcare workers to this in case they are involved in an accident.

When they were first developed, antibiotics were seen as wonder drugs that could cure everything. However, antibiotic resistance, the ability of bacteria to develop strategies to avoid the action of antibiotics developed quickly. This was partly due to the misuse of antibiotics, which still continues today. Many people start a course of antibiotics and then fail to finish every tablet over the required time period. GPs can prescribe antibiotics for infections that are viral, usually because of pressure from a worried parent. The decisions are difficult. Today, there is also a thriving trade selling antibiotics via the internet – a sort of black market.

If antibiotics are to remain a valuable medicine, it is up to everyone – doctors, healthcare workers, health policy makers and the general public to make sure that antibiotics are not misused. Otherwise, the day will soon come when bacterial infections are again as deadly as they used to be before 1940.