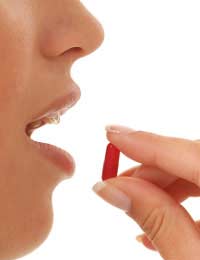 Antibiotics are useful drugs that can treat bacterial infections very successfully, despite the antibiotic resistance that has developed. Taking antibiotics does carry some risk of side effects, and it is best to take antibiotics only when an infection is severe enough to cause pain and distress, or is life threatening or a danger to others.

One of the main problems with any antibiotic is, while the drug is specific for bacterial cells, it cannot be made specific to only harmful bacteria. It is not possible to develop an antibiotic that does not kill normal friendly bacteria in the body as well as the pathogen causing the infection.

Friendly bacteria grow in their millions on the skin, in openings to the body such as the mouth, nose and vagina, and in the intestines of the digestive system. They carry out important functions at all these sites but their primary role is to crowd out potential pathogens, preventing them from setting up an infection.

These potential pathogens include fungi such as Candida, as well as bacteria such as pathogenic strains of Staphylococcus aureus. When antibiotics destroy friendly bacteria, these potential pathogens can seize the opportunity and can grow much more easily as they have no competition. This is one of the reasons why antibiotic therapy often results in thrush, a fungal infection caused by Candida.

Effect On The Digestive System

Antibiotics are usually taken as a pill and swallowed. The capsule dissolves in the small intestine and the active ingredient passes across the intestinal wall and into the bloodstream to be carried round the body. The initial contact between the drug and the digestive system can cause some of the common side effects of nausea and vomiting.

Any residual drug passes into the bacteria-rich environment of the large intestine and enhances the killing effect of the antibiotic circulating in the blood stream. The effect of this is to kill large numbers of friendly bacteria in the gut.

The Impact Of Destroying Friendly Bacteria

The bacteria that fall victim to the antibiotic include bacteria that help keep other species under control and also bacteria that contribute to the digestion of food. Some bacteria in the human gut make vitamins such as vitamin K and some of the B vitamins. If they are destroyed, the body does not receive these vitamins and, if antibiotic therapy continues over an extended period, vitamin deficiency can result.

Overgrowth of pathogenic species of bacteria can also occur. Bacteria such as Clostridium difficile are normally present in the large intestine, but their populations are kept to a minimum size by friendly bacteria.

After antibiotic therapy, the C difficile can grow rapidly as their usual constraints have disappeared. The bacteria produce toxins that irritate and kill the cells that line the large intestine, causing severe diarrhoea and internal bleeding. This infection happens frequently in elderly people whose immune systems are weakened by underlying illness, and C difficile infections have become very common in hospitals and nursing homes in the last 10 years.

Recently published research on patients treated with ciprofloxacin for infections of the urinary tract has actually measured the impact of antibiotic therapy on the proportions and numbers of friendly gut bacteria. Before treatment, the scientists detected around 5500 different strains and species of bacteria in the faeces of volunteers in the study. They were then given a typical course of the antibiotic and their gut bacteria were assessed again. About a third of the different types of bacteria had gone.

Further monitoring showed that the bacteria did not return to their normal levels for about a month, suggesting that the health of the person treated could be affected long after the treatment had been completed.

If you have to take a course of antibiotics, some doctors recommend that you eat plenty of natural yoghurt, containing live Lactobacillus bacteria during your treatment. These bacteria help to replenish the stocks of friendly bacteria in the large intestine and may lessen some of the effects of the treatment.

Probiotic therapies are being trailed at the moment to see if they could be used to prevent some of the cases of C difficile in the elderly. Until they are proven, however, eating foods naturally high in friendly bacteria seems to be sensible and carries few risks.

What Are Antibiotics?
Share Your Story, Join the Discussion or Seek Advice..
This article was very helpful, it's 3:45 am central I just woke up and and after eating a fairly large meal at exactly 4:30PM , my only meal of the day besides a banana I threw up and to my surprise the food was far from being digested. I recently completed a treatment of antibiotics which does state in the information provided with them that I may experience diarrhoea up to a week after taking the medication (would've been nice for them to include how one may deal with this to ease the discomfort.) It's been about a week now and I have definitely suffered from diarrhoea for about 3 days immediately after taking the medication. Now I'm experiencing stomach bloating, nausea, and slow digestion of food. This article seems to describe exactly what I'm going through so I'm gonna run out and get some natural yogurt as soon as the store opens and pray that this helps before I make a Dr's appointment.
Shawneeblack - 5-Jul-11 @ 9:47 AM
Title:
(never shown)
Firstname:
(never shown)
Surname:
(never shown)
Email:
(never shown)
Nickname:
(shown)
Comment:
Validate: