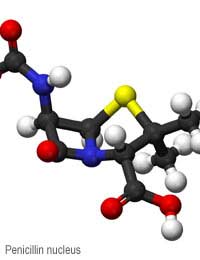 The first antibiotics developed were penicillin and streptomycin and these are both still in use today, despite the development of antibiotic resistance during the last 70 years. Penicillin is now in a class of antibiotics known as the penicillins, which also includes the more recently developed antibiotics ampicillin, flucloxacillin and methicillin. These antibiotics all prevent bacteria making strong cell walls, leading to lysis and death of the bacteria.

Streptomycin, which was also developed in the 1940s, is now in the aminoglycoside class of antibiotics, which also has gentamycin, kanamycin and netromycin as members. All of these antibiotics bind to the smaller subunit of the bacterial ribosome, preventing the bacterium making new proteins. They work well to treat infections by gram negative bacteria such as Pseudomonas aeruginosa, Escherichia coli (E. coli) and Klebsiella bacteria that cause pneumonia. The aminoglycosides do not work against bacteria that grow well in the absence of oxygen.

There are a great many antibiotics in this class. The earliest cephalosporin was isolated by an Italian scientist in 1948, from bacteria growing in a sewer on the island of Sardinia. The compound that was extract was found to be active against Salmonella typhi, the pathogen that was responsible for typhoid fever. The cephalosporins work in the same way as penicillins – they prevent proper production of a bacterial cell wall.

The tetracyclins also act on the bacterial ribosome to prevent the bacterial cell making vital proteins. As well as the drug tetracycline, the group also includes doxycycline and oxytetracycline. These antibiotics are not generally used for common bacterial infections apart from severe acne. They are used to treat infections by Mycoplasma species (tuberculosis and leprosy), Rickettsial species, Chlamydia species and the bacteria that cause Lyme disease, syphilis, anthrax and plague.

Tetracyclins have quite significant side effects in addition to the usual digestive disturbances. They increase sensitivity of the skin to sunlight, they can affect the enamel on teeth, causing browning, and they can slow down bone growth

Macrolide antibiotics are generally used to treat infections caused by streptococcal bacteria and respiratory infections generally. They are also active against syphilis, Lyme disease and leprosy and tuberculosis. Erythromycin is probably the most well known antibiotic in this class, which also includes clarithromycin and telithromycin, which is often used to treat pneumonia. The macrolides can have a toxic effect on the liver, causing liver toxicity and jaundice and so should not be given to people who have an underlying liver problem such as an infection with hepatitis C.

Glygopeptide antibiotics such as vancomycin, telavancin and decaplanin prevent the adding of new units to the bacterial cell wall. Although they are similar in action to the penicillins and the aminoglycosides, the glycopeptides are extremely toxic and are used in few patients. They are reserved for people whose infections will not respond to other antibiotics because of antibiotic resistance. Until the development of newer antibiotics, glycopeptides were the standard treatment for MRSA.

Quinolone antibiotics interfere with the bacterial enzymes bacterial DNA gyrase or the bacterial topoisomerase enzyme that help bacterial DNA to replicate during cell division. Commonly used quinolones include ciprofloxacin, lecofloxacin and norfloxacin. They are particularly useful antibiotics for treating infections of the urinary tract, pneumonia that is acquired in the community (as opposed to hospitals) and diarrhoea caused by pathogenic bacteria such as Shigella. The quinolones cause very few side effects.

When MRSA first started to cause hospital epidemics in the 1990s, the search for new antibiotics to treat these resistant bacterial infections became intense. A new class of antibiotics, the oxazolidinones was developed, of which there is currently only one available drug, linezolid. This is active against MRSA and is reserved as the last line of treatment, and kept exclusively for this purpose. It is hoped that this will prevent or at least slow the development of bacterial resistance to it.

Daptomycin, an antibiotic originally developed in the 1980s and then put on hold because of its toxic side effects, has been revived since the 1990s, again to treat MRSA. It has a unique mechanism of action and works by destroying the cell membrane of bacterial cells. It is active against gram positive bacteria generally but, like linezolid, is kept as a restricted treatment for infections caused by antibiotic resistance organisms.