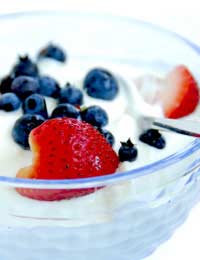 Bacteria present in large amounts in food can cause severe food poisoning. Bacteria such as E. coli, particularly strain 0157, the Clostridium and Salmonella species cause serious illness and some of the infections that people develop after eating contaminated food can kill them. But there are other, friendly bacteria that do no harm when we eat food that contains them. In fact, some bacteria in food may be very beneficial and eating foods that are deliberately designed to contain live cultures of these beneficial bugs could be good for health.

Scientists working at the Pasteur Institute in Paris in the early 1900s were the first to suggest that foods containing large amounts of friendly bacteria could repopulate the large intestine, getting rid of potentially or actually harmful bacteria and providing great health benefits. Early observations of a soldier who did not fall ill in a severe Shigella outbreak near to the end of World War I showed that his gut had large amounts of a strain of E. coli bacteria, later termed E. coli Nissle 1917, after its discoverer and the year of its isolation.

This E. coli strain was used successfully as a bacterial 'medicine' to treat other people who were severely ill with Shigella and Salmonella infections. When they ate live cultures, this strain of E. coli bacteria populated their digestive system and won the competition for space and resources, ousting the pathogenic bacteria causing the disease.

Later, other types of bacteria such as those from the Lactobacillus species and the Bifidobacterium species, were found to be able to repopulate the human gut when they were eaten. The term probiotic was introduced in the 1950s to describe substances that could increase the growth of friendly bacteria in the body. They were given this name as they were the opposite of antibiotics – substances that killed bacteria.

Eating yoghurt with actively growing cultures of milk-fermenting bacteria has been common in many cultures for thousands of years but the practice was rediscovered in the US and western Europe during the 1960s because of the interest in probiotic foods. Lactobacillus acidophilus is one of the best known species of bacteria to be used to manufacture live yoghurt, but other Lactobacillus species are also used, as are several species of Bifidobacteria.

As well as yoghurt, live bacteria are found in several traditional foods from different cultures. The Japanese eat tempeh and miso, fermented bean products, and fermented soy sauce also contains live bacteria. Sauerkraut, a German delicacy consists of shredded cabbage that has been fermented by Lactobacillus bacteria and is traditionally eaten with German sausage. Sauerkraut tastes acidic because of the lactic acid produced by the bacterial culture that produces it. A fermented tea, known as kombucha has been drunk in China for thousands of years, and is made from a mixed culture of Acetobacter bacteria, which produce acetic acid, and various yeast cultures. The ancient Chinese believed this to be a health giving drink, and it also became popular in Russia in the 19th century.

Health Benefits of Bacteria in Food

There is growing evidence that eating foods, taking food supplements or even chewing specially developed gum can help to establish the growth of friendly gut micro-organisms. This has been shown to help to fend off pathogenic species, including H. pylori, the bacterium associated with a greatly increased risk of stomach ulcers.

It has also been shown that probiotic foods can reduce the diarrhoea that is common during and after a course of powerful antibiotics. This occurs because the antibiotics kill off many of the bacteria that normally live in the gut in addition to the bacteria the treatment aims to eliminate. There are also believable observations that such foods help people with disorders such as irritable bowel syndrome, constipation and ulcerative colitis.

Not so clear cut is whether the claims that probiotic foods can help treat allergies and strengthen the immune system are reliable. Some manufacturers suggest their probiotic yoghurts can also reduce blood pressure, cut the risk of developing cancer of the colon and even slow down some of the effects of the ageing process. There is very little hard evidence to support these claims, and it is unlikely that the large clinical trials needed to test them could ever be carried out. Many would welcome them, but designing trials to distinguish the benefits of probiotic foods from all other aspects of the diet and other lifestyle factors would be very difficult.