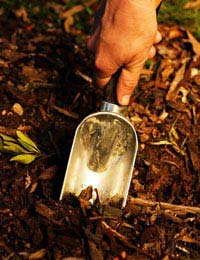 Bacteria that live in soil all over the world recycle the nitrogen and carbon contained in the complex organic molecules that remain in plants and animals after they have died. Together with different species of fungi, various types of bacteria are able to drive the process of decomposition. As well as recycling valuable nutrients, this also removes most of the physical evidence of the dead organism. Without their activity, we would be literally knee deep or even buried by the bodies of everything that had lived before us!

The bacterial species that live in soil water are key to the processes of decomposition. Some of these are natural aerobic bacteria but many can survive in pockets of soil that are quite low in oxygen, or that do not contain oxygen at all. Such anaerobic bacteria play a key role in the decay of dead plants and animals that lay on the ground.

Bacteria and the Nitrogen Cycle

Several different bacteria from the Azotobacter species help the element nitrogen cycle through the environment. Nitrogen is a key component of proteins in all living things. It forms a central part of the amino acid molecule. Azotobacter bacteria live in soil water and also inside the root nodules of some types of plants, such as the legumes (for example, peas and beans). The bacteria have enzyme systems that fix nitrogen from the atmosphere, converting it directly to nitrogen compounds that can be used by plant cells.

Achromobacter and Pseudomonas bacterial species, which are all anaerobic bacteria, carry out the nitrogen fixation process in reverse. Instead of taking nitrogen from the air and converting it to nitrogen compounds, they convert nitrogen compounds from dead and decaying organic matter to replenish the elemental form of nitrogen in the air.

Yet another species, the Actinobacter bacteria, help to decompose the dead bodies of plants and animals. They change the nitrogen-containing compounds directly into other compounds that stay in the soil and that can be reused by the living plants already rooted in adjacent areas.

Bacteria and the Carbon Cycle

Bacteria that help break down the bodies of dead plants and animals also play a role in the recycling of the element carbon in the environment. Bacteria, and some fungi, perform chemical reactions on the tissues of decaying organic matter and convert the carbon-containing compounds into carbon dioxide and water, or to methane, depending on whether the bacteria are aerobic or anaerobic.

In ancient times, the bacteria that participated in the recycling of carbon helped to create fossil fuels. Organic matter that underwent bacterial and fungal decomposition became buried under layers of sand and other debris. Layers and layers of material were deposited on top of them, creating a great weight and pressure, which eventually compressed the remains of the organic matter. The result of this compression was the formation of carbon-rich fuels; coal, oil and natural gas.

The discovery of the potential of these fossil fuels to release useful energy when burned has been very significant in human history but people today realise that we cannot depend on them as energy sources. A major reason for this is that fossil fuels are no sustainable fuels – they will run out one day, and that day might not be too far away.

Fossil fuels also lock up a lot of carbon that is released when they are burned for heat – this increases the carbon dioxide that is released into the atmosphere and contributes to the global warming effect called the greenhouse effect. Many people are now trying to reduce their carbon footprint – the overall quantity of carbon that their activities release into the environment to try to halt global warming. Reducing fossil fuel consumption is one way towards this.