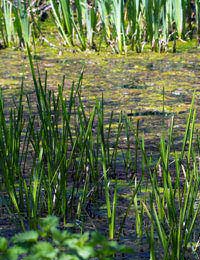 Most people think of bacterial diseases affecting animals and humans but plants can also succumb to bacterial infections. Bacteria can enter through cuts our other areas of damage that occur in the leaves or stems due to wind bending the plant, objects hitting the plant, aphids sucking the plant sap or animals grazing on it. The symptoms then depend on which internal tissues and structures the infection takes a hold in.

Although thousands of species of bacteria can cause disease in animals and humans, a much smaller number, probably about one hundred, are able to infect plants and damage them. Bacterial plant diseases are generally due to bacilli, bacteria that are shaped by rods, some of which are gram negative bacteria and some of which are gram positive. The majority of plant diseases due to bacterial infection occur in parts of the world that have a tropical weather pattern.

Once a species of pathogenic bacteria gains entry to a plant it causes one of four main problems that leads to a less than healthy plant. Some bacteria produce enzymes that break down the cell walls of plants anywhere in the plant. They do this to break open to cell to gain access to the nutrients inside but the plant cells affected die quickly, causing parts of the plant to start rotting. This is why plant diseases that develop due to cell wall degrading enzymes are generally known as a type of 'rot'.

Some bacteria produce toxins that are damaging to plant tissues generally, usually causing early death of the plant. Others produce large amounts of polysaccharide sugars that have long chains and are very sticky. As these travel in the water carrying vessels, the xylem, they block the narrow channels, preventing water getting from the plant roots up to the shoots and leaves, again causing rapid death of the plant. Finally, some bacteria produce proteins that mimic plant hormones. These lead to overgrowth of plant tissue and tumours form. These grow rapidly, taking up valuable nutrients and energy resources that the plant would otherwise use for its own tissue growth and it becomes weakened and susceptible to attack by other pathogens such as fungi.

Types of Bacteria That Infect Plants

One of the main types of bacteria that cause plant disease are the Proteobacteria. This large group of bacterial species include bacteria that cause disease in humans, such as Vibrio cholerae, which causes cholera, and Helicobacter pylori, which is associated with stomach ulcers. Some species of Proteobacteria live in soil where they fix nitrogen from the air, forming useful compounds that plants use in their growth. One species, Xanthomonas campestris, which affects plants from the Brassica and Arabidopsis groups causing black rot. The disease symptoms progress from discoloured leaves to extensive wilting of all of the stems and leaves, with all the leaves eventually turning yellow. Parts of the plant start to die and rot and the plant dies completely shortly afterwards.

Xanthomonas campestris causes its effects on the plant by producing large amounts of polysaccharides that block the xylem vessels that carry water through the plant. So much is produced that the bacteria is actually grown in culture to obtain these polysaccharides, better known as xanthan gum, a thickener used in the food industry.

Some species of Mycoplasma-like species of bacteria also cause serious plant disease. These are bacteria that do not have cell walls and they are introduced into the phloem tissue of plants by insects such as aphids that suck plant sap. Phloem vessels in plants are part of the transport system for sugars, which are generally moved from the leaves, where they are made by photosynthesis, to other parts of the plant, including the roots. Aphids use needle-like mouth parts to puncture plant stems and tap directly into this rich supply of liquid sugar. The Mycoplasma bacteria grow inside the aphids and other sap-sucking insects and are then introduced into their plant host by a very effective insect hypodermic. Plants that produce large amounts of sugar are the worst affected – for example coconut plants and sugar cane. The overall effect of the infection is to weaken the plant, opening it up to other diseases. The leaves usually lose their colour and another common symptom is green flowers, or an absence of flowers.

Although some of the bacteria that infect plants are from the same large groups as bacterial pathogens in humans, there is no recorded instance of bacteria being passed from plant to person and causing an infection. Plant bacterial diseases are highly specific.