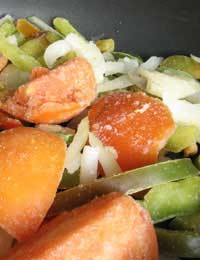 Bacteria grow well when they are between 5 degrees Celsius and 65 degrees Celsius and when they have a good supply of nutrients. Food that is stored for prolonged periods within this temperature range therefore provides the perfect conditions in which bacteria can thrive. If the contaminated food is then eaten, the result can be food poisoning. This usually causes only a few days of very unpleasant symptoms such as stomach pains, nausea, vomiting and diarrhoea, but it can be more serious or even fatal. Some bacteria cause extremely dangerous forms of food poisoning. Clostridium botulinum, for example, causes the deadly disease botulism, and some strains of E. coli bacteria such as E.coli 0157 cause severe food poisoning that can bring on kidney failure.

Since bacteria can only divide at temperatures over 5 degrees Celsius, refrigeration at 2-4 degrees Celsius prevents any bacteria that are within it from multiplying. A fridge must be kept at the correct temperature, so it is important not to overfill it, or to put food inside when it is still hot. Cooked food should be cooled quickly and then placed in the fridge either wrapped or placed in a sealed container.

Frozen food that needs to be defrosted before cooking should be defrosted for several hours, ideally overnight in the fridge, so that it never has the opportunity to warm up above 5 degrees Celsius. Meats should be defrosted on a plate or inside a sealed container to prevent juices dripping inadvertently onto other foods during the defrosting process.

It is also good food hygiene practice not to store raw meats, whether frozen, defrosting or fresh, in close proximity to food that is going to eaten without further cooking. Large outbreaks of food poisoning have occurred when pork pies and cooked ham have been sold by a butcher who has stored these ready-to-eat foods next to raw meat, allowing them to be contaminated by the meat juices.

Beef and lamb from a reliable source can be cooked until still rare (red or pink in the middle of the meat) but all other meats, including chicken, turkey and pork should be cooked through to prevent food poisoning. Foods should be cooked for the correct time at a high enough temperature to make sure that all bacteria are killed. This usually involves boiling, frying or roasting. Once the meal is ready, it should be served and eaten as soon as possible, before it begins to cool down.

Reheating chilled food is often done using a microwave. While this is efficient and quick, it is important to stir and mix food at least twice during the reheating process to make sure that the food is piping hot throughout. Special care is needed when reheating home-cooked food that has been cooled and is eaten as reheated leftovers. Cooked rice is surprisingly dangerous. Raw rice grains are often contaminated with a bacterium called Bacillus cereus, which can survive boiling. If cooked rice is cooled slowly, or stored at over 5 degrees Celsius, the bacteria will multiply and then still survive thorough reheating. As rice is relatively inexpensive, it is best to always cook it fresh.

For good food hygiene, personal hygiene is also crucial. Before preparing food, hot soapy water should be used to clean the hands up to the wrists and under the fingernails. Surfaces should be kept clean and wiped with a weak solution of bleach or an anti-bacterial spray, especially after preparing raw meat. Separate chopping boards should be kept for raw meat, vegetables and other foods, and all should be washed thoroughly after use.

Ideally, disposable cloths or kitchen roll should be used for wiping surfaces, as cloths left in the open at room temperature become a breeding ground for bacteria. For people who prefer dishcloths, soaking in hot water and bleach for at least 30 minutes at least once a day can make them more hygienic.

Many of the bacteria that cause food poisoning can be passed on by someone who prepares food but who has failed to wash their hands adequately after using the toilet. Where food is prepared for a large number of people, facilities should be provided for regular hand washing. Staff should be discouraged from wearing rings, bracelets and any jewellery that can harbour bacteria, and any cuts and grazes should be covered. Anyone who has experienced recent vomiting or diarrhoea should never prepare food for others.