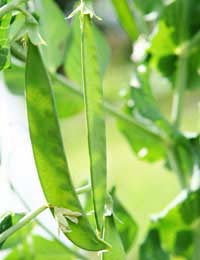 Some of the plants that we eat because they are high in protein owe their nutritional value to bacteria that live in their roots. Plants of the legume family, which includes all types of beans and peas, but also clover, peanuts and lupins, have adapted to grow root nodules. These large root growths provide a safe environment for nitrogen-fixing bacteria that, in return, provide nitrogen-rich compounds in a form that the plant can easily use. Nitrogen compounds are valuable raw materials for protein production and the plant is able to produce fruits that contain high protein concentrations without spending a lot of energy obtaining the necessary building blocks.

Fixing Nitrogen From the Air

There is a large amount of nitrogen in air – about 79% of air is due to nitrogen gas. However, nitrogen is a fairly inert gas – this element does not readily react with anything and is generally unavailable to most plants. It is unreactive because it exists as a molecule containing two nitrogen atoms that are bound very tightly together by a triple-strength chemical bond. Some species of bacteria have developed enzyme systems that are able to absorb nitrogen in its elemental form and convert it into nitrogen dioxide, ammonia and nitrates by breaking this strong bond. One of the enzymes, nitrogenase, catalyses the reaction that fixes nitrogen into ammonia, which is then converted quickly into the amino acid glutamate.

The bacteria that live in root nodules are said to have a symbiotic relationship with the plant as both organisms benefit from the association. Most of the bacteria involved in nitrogen fixation in root nodules belong to the species Rhizobia. These bacteria produce extra nitrogen compounds for the plant during its life but, after the plant dies, this protein also becomes available to other plants as it releases them into the soil. This has long been exploited by farmers who grow a crop of legumes and then plough the plants back into the land at the end of the season, to provide a natural fertiliser.

Bacterial species that live free in the soil are also able to extract and fix the nitrogen from air. The Cyanobacteria, or blue-green algae, are one major class of bacteria that can do this, and one of the most primitive. Cyanobacteria are responsible for the oxygen in the atmosphere, which was probably one of the main factors that enabled complex animal life to develop on Earth. Their ability to fix nitrogen and to form nitrates, nitrites, amino acids and urea, as well as ammonia could also have helped with the development of early plant life.

Azotobacter and Azomonas bacteria can also fix nitrogen and do so very well in aerobic conditions. The bacteria have variable shapes – mostly spherical but highly adaptable and they usually have flagellae that give them great motility. They live free in the water that binds to soil particles, swimming around and protecting themselves from drying out in drought by producing large amounts of protective slime outside their cell walls.

The nitrogen cycle describes the way that nitrogen cycles through the biosphere from the air, to bacteria, plants and animals and then back to the air again. The reuse of nitrogen is vital for the support of all living things on Earth but, at any one time, most of the nitrogen in compounds that are useful to life are locked up in the bodies of living and dead (but not yet decayed) plants and animals. The bacteria that fix nitrogen from the air provide a constant and vital in-coming supply of nitrogen for the growth and development of new organisms.