Home > Case Studies > My Stomach Ulcer Was Due to a Bug: Case Study 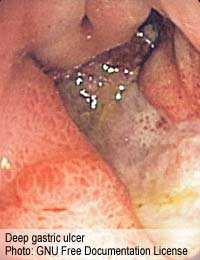 Generally healthy, if a little overweight, Reg began to have problems with his digestion after work at the supermarket chain where he was a manager began to get stressful.

“There was some trouble over a missing piece of jewellery and the relationships between the staff became very strained. As the General Manager of the large store where it happened, I took the brunt of everyone’s bad feeling. For the first time in my life, I experienced real stress.”

The woman whose expensive gold charm bracelet had gone missing accused a colleague of stealing. The bracelet never turned up and both women left after a few weeks, after intense rows and uncomfortable silences, which created a very bad atmosphere.

Reg put down his abdominal pain that came in the middle of the night down to stress and drinking a bit more than usual. As things got back to normal at work after the two co-workers left, he expected to feel OK again, but the pain was worse than ever. “I was not sleeping and I started to feel uncomfortable during the day as well,” says Reg. His doctor suspected that he might have an ulcer and sent him for some tests.

“My brother and sister had both got a history of ulcers, so I wasn’t really surprised. I had never been troubled before but it puzzled me that the consultant at the hospital was so interested in my bad breath. I am famous for it and none of my grandchildren will come and sit on my knee for a cuddle, they say I am Granddad Firebreath,” laughs Reg.

Reg’s halitosis had been with him as long as he can remember but he had taken good care of his teeth, which were better than most men of his age. The test results revealed the Reg did indeed have an ulcer, but his blood showed high levels of antibodies to a bacterium – Helicobacter pylori.

“I had thought that stomach ulcers developed because of stress but I was told that over 80% are caused by a bacterial infection. I had never heard of Helicobacter pylori, but apparently people can be infected in childhood and never know it. We grew up in the East End of London, it was tough and conditions were hardly luxurious. I’ve probably had the infection since then but it is only now that it has made its presence felt,” explains Reg.

Reg was given triple therapy with three antibiotic drugs known to clear H. pylori infections and was tested again six months later. “Not only had the ulcer cleared up but to the delight of all the family, my bad breath had gone too!” says Reg. Tests showed that Reg was clear of the bacterial infection and that his ulcer had healed well. The consultant explained that the bacteria lives anaerobically in the stomach – and because it uses no oxygen, it produces compounds that are very smelly. Bad breath is often a symptom of chronic infection.

The consultant who treated Reg also took a complete family and life history and suggested that Reg contact his brother and sister and encourage them to either see him or their own doctor. Both also tested positive for H pylori. Within six months of Reg’s diagnosis, they were both also treated successfully and are now free of ulcers for the first time in years.

“I will never know for sure, but it is possible that the stress at work was not the cause of my ulcer but it did contribute to allowing the bacteria to change from a chronic to a more acute infection. The extra drinking didn’t help either. But if it wasn’t for that, I would have gone on for years with this infection and my brother and sister would not have got the treatment they needed either. I knew where the former colleague from the supermarket who had lost her bracelet had got a new job and I went in there one day with a gift box containing a new gold charm bracelet, to say thanks. She couldn’t believe what I told her – every cloud has a silver lining, as they say,” chuckles Reg.

The link between H pylori and stomach ulcers was only made in the 1980s by the Australian researchers Barry Marshall and Robin Warren. They were awarded the Nobel Prize for Medicine in 2005 for discovering this association, and for opening the way for hundreds of thousands of people to receive effective treatment for their stomach ulcers.

My Mum Died of C Difficile: Case Study
Share Your Story, Join the Discussion or Seek Advice..
The first sentence makes no sense at all! How about: Generally healthy, even if a little overweight, Reg began having indigestion that he attributed to his stressful management postion at a supermarket.
Sentence structure - 30-Sep-15 @ 2:33 AM
Title:
(never shown)
Firstname:
(never shown)
Surname:
(never shown)
Email:
(never shown)
Nickname:
(shown)
Comment:
Validate: