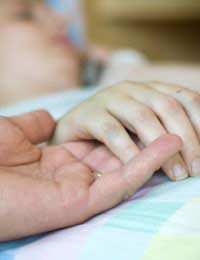 Jenny has just gone back to work part-time after being off for nearly 10 months. She still looks thin and pale and is trying to build up her strength again after nearly losing her life to toxic shock syndrome.

“Its hard to believe what has happened and because of such a simple decision,” says Jenny, her voice trembling. “I almost died at the age of 29 – I almost wasn’t here to see my two young children grow up,” she adds.

After Jenny’s daughter was born three years ago, she returned to work at the farm shop where she had helped to build the business. The owner was pleased to see her back and understood that she needed flexible working hours to combine her job there with looking after six month-old Charlotte and 3 year-old Thomas.

“After Charlotte was born, we seriously considered a permanent method of contraception and my husband was thinking about having a vasectomy. But we weren't totally sure. I didn’t want to take the pill again, so the clinic recommended using a diaphragm and spermicidal jelly. This seemed an ideal solution and it was working very well,” explains Jenny.

Everything was fine until the end of January last year, when Jenny began to feel really unwell. “I had terrible period-like pains and I felt faint and sick. I was hot and then cold and thought I was getting flu. Jenny tried to finish her stint at the farm shop but collapsed and was rushed to hospital.

In the emergency department she was found to have a high temperature and a skin rash. She began vomiting every few minutes and was delirious and confused. At first, the doctors suspected she might have meningitis and quickly arranged for some fluid to be taken from around her spinal cord. That proved clear but Jenny’s condition deteriorated further.

“I don’t remember any of this, but I was rushed into intensive care and had to be hooked up to a life support system. My breathing was becoming very erratic.”

After 24 hours more and further examinations, doctors found that Jenny had a serious infection of the cervix and that it has spread to her uterus. The bacterium that was causing the infection was Streptococcus pyogenes and Jenny had developed toxic shock syndrome. Her body was filled with the poisons and toxins that the bacteria were releasing as they grew. Even though the infection was fairly localised all her organs were affected and she was in danger of experiencing multi-organ failure.

“It was a truly terrifying time for all of us,” remembers Jenny’s husband Clive. “I was at the hospital with Jenny’s parents and my parents were looking after the kids. None of us slept for about four days.”

Jenny was given intravenous antibiotics with several types of drug, a drip to replace lost fluids, steroids to try to reduce the inflammation and damage to her body and full intensive care. She almost slipped away the next day but then the antibiotics began to take effect. After two more days, her condition stabilised and she was out of danger.

“I was in hospital for almost six weeks in the end. I was very weak and my kidneys didn’t work properly at first. I was very lucky to have survived but my body certainly took a battering.”

Sadly, a month after Jenny’s fight for life, her uterus and ovaries had to be removed because they had been so badly damaged by the infection. “If I had got another infection, that would have been the end of me,” she says.

After the hysterectomy, Jenny’s strength returned slowly as she recuperated at home over the next four months. “I had physiotherapy and counselling, the hospital and GP could not be faulted for the way they have followed up. I am now starting to feel like my old self again. I just still can’t believe that I nearly died because of an infection that started in a contraceptive diaphragm.”

Jenny’s case if very unusual as it is extremely rare for the use of a contraceptive diaphragm to lead to infection. It has been described before, but most cases of toxic shock syndrome occur after a bad skin infection caused by Streptococci, or as a result of leaving in a tampon. Women who forget to remove the last tampon at the end of a period have also been known to develop toxic shock syndrome and there was a spate of cases in the late 1970s when companies developed a long-term use tampon.