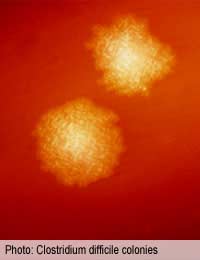 Three months ago, 73-year old Louisa died after spending 7 weeks in hospital. Daughter Sandra tells of her plans to battle against the ignorance surrounding Clostridium difficile, the bacterium that took away her beloved mum.

“Just after mum had her 73rd birthday she was due to go into hospital to have a knee replacement but none of us were unduly worried about it. Mum had always been active and the arthritis in her knee had held her back – she was looking forward to gardening again,” explains Sandra.

The knee replacement surgery went well but two days later, Louisa complained of feeling hot and having a tight chest and cough. She was diagnosed with a mild chest infection and was given a broad-spectrum antibiotic for 7 days to clear it up. “The staff got her up each day and she was having physiotherapy to keep her mobile and seemed to be doing OK. We were getting ready for her to come and stay with us for a couple of weeks until she could manage on her own again,” remembers Sandra.

Sandra had seen her mother the previous afternoon and was concerned that she didn’t quite seem herself. Louisa had seemed distant and a little confused and had confided that she had made a mess of the bed that morning and had been cleaned up by the nurses. “She was very embarrassed but I tried to reassure her that antibiotics do sometimes cause a bit of diarrhoea. I was bothered all the same.”

Half and hour before she was due to set off to visit again the next afternoon, Sandra got a phone call asking her to come in urgently as her mother had ‘taken a turn for the worse’. Sandra drove straight there to find that Louisa had been moved to a separate room with a handwritten card on the door saying ‘Barrier Nursing’. “Mum was in a terrible state and was constantly passing watery diarrhoea. She had terrible stomach pains and couldn’t even keep sips of water down. I heard C diff mentioned, but nobody explained.”

Sandra’s relationship with the hospital staff then began to deteriorate almost as fast as her mother’s health. “They started to act like she wasn’t worth treating. They made me wear white overalls to sit with her but bundled all her dirty, soiled clothes into a supermarket carrier bag for me to take home and wash. So much for containing the infection!”

Louisa was then given more antibiotics and Imodium but was not put on a drip. She had a catheter fitted and it was obvious to Sandra that she was getting badly dehydrated. “The urine in the bag from the catheter looked like coca cola – but why did it take me to point this out to a ward of supposedly trained nurses?”

Sandra was repeatedly fobbed off and became frantic about her mother, who was losing weight and kept drifting off into a coma. “Although the staff had talked about C diff as ‘ a possibility’ there were no test results for days and we were just left in the dark. Six long weeks after she had been admitted for her knee replacement, my poor mum was transferred to intensive care with kidney failure, heart failure and sepsis. The bacterium had burst her large bowel and she was due to be operated on to remove it.”

Louisa lived a further four days in intensive care, barely knowing where she was or that Sandra and her sister Helen were there. “I have never known such an awful time in my life. My mum who had always looked after us and had been lovely, slim and fit all her life looked like she was 100 years old. She didn’t know us and she couldn’t speak. Sometimes she did cry silently, which was unbearable. On day 4, at 2pm, the doctor talked to us about stopping all treatment and letting her die peacefully with dignity. I screamed at him and had to be restrained from actually hitting him. What dignity? What peace? When mum died 2 hours later she had experienced weeks of agony, indignity and had died the most awful way that I can imagine.”

To their horror, the same doctor signed the death certificate for Louisa, citing ‘old age’ as the cause of death. C diff was not mentioned. Sandra and her family are now engaged in a formal complaint against the hospital and are seeking compensation. “If we get the money, we intend to donate it to a fund to research C diff and in mum’s name. The disease is a big problem now in hospitals but turning a blind eye is not the way to deal with it.”