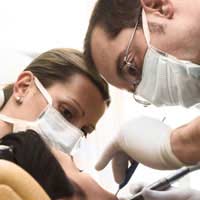 The problem of decaying teeth has been a fact of life for people since the Neolithic period thousands of years ago. Archaeological studies have shown that not only did ancient people from many different civilisations have dental caries, they also tried to fix them. Human teeth found in Bangladesh and dated to at least 6000 years ago show signs of quite good dentistry, including perfectly drilled holes to relieve the infection in rotting teeth.

In the modern Western world, people eat a diet that can be very high in refined sugars. These form the ideal nutrient for the bacteria that cause tooth decay and dental caries. The more sugar we eat, the faster our teeth decay. It is now relatively rare for anyone in the UK to reach the age of 20 without ever having a filling.

Children who are given very sweet drinks, which they drink slowly for comfort, or worse still, drink through a bottle and teat as a way to fall asleep are at very high risk of developing tooth decay in their milk teeth.

Eating foods rich in glucose, sucrose and fructose leaves a thin, sticky layer of sugar on the teeth that provides the ideal habitat for bacteria that are present in the mouth as generally friendly bacteria. It is only when given unlimited sugar that the Lactobacillus species, the Actinomyces bacteria and bugs of the species Streptococcus mutans become harmful. These bacteria digest the sugars that coats the teeth and produce lots of lactic acid as a by-product. This lowers the pH in the mouth, causing minerals to leach out of the tooth enamel.

The cracks and fissures in the surface of teeth form natural pockets that support the growth of bacteria so it should be no surprise that these parts of the tooth are very prone to tooth decay. Bacteria collect in the pockets, they are difficult to remove by brushing, and the acid they produce can concentrate, causing maximum damage. As the protective enamel wears away, a cycle of further damage occurs as acid is able to damage further layers, leading eventually to holes in the tooth's surface.

Plaque, the layer of actively growing bacteria, sugars and bits of food that remain near the teeth after eating is very difficult to remove, even by strenuous brushing with the a good toothpaste. Firmly attached to the tooth's surface, the biofilm of bacteria grows well using the plentiful food supply provided at every meal, and releases a constant stream of damaging lactic acid right onto the tooth enamel. As it becomes firmly established, the teeth begin to feel rough, almost 'furry' and this is the point at which plaque has really become a problem.

Disclosing tablets can reveal the extent of plaque, colouring it bright red. If this is done straight after brushing, it is quite a shock; most of the surface of all the teeth are coloured and much more brushing is needed to remove most of the stain.

Calculus and the Gums

It is not only the teeth that can suffer damage because of bacterial activity in the mouth. The gums, particularly the part of the gums that are nearest up to the surface of the bottom of the teeth are highly vulnerable. Bacterial action here can cause inflammation of the gums, known medically as gingivitis.

Food particles, plaque and hardened, calcified plaque, called calculus build up below the inflamed gums, causing yet more tissue damage and inflammation. This vicious cycle can be broken if the teeth are descaled every six months by a dentist. Ultrasound is used to chip away the hardened deposits and the gums are left clear to recover. Regular brushing, flossing and in severe cases, special mouthwashes, in between descaling treatments can help control gingivitis. It is worth it because, if left untreated, inflamed gums can shrink away from the teeth, and teeth that are otherwise healthy can become loose and fall out.

To reduce tooth decay, eating less sugar, regular cleaning and flossing are all good measures to keep the bacteria that cause tooth decay from getting out of control. Seeing a dentist every six months for a check-up can also help to detect problems early, so they can be dealt with before permanent damage is done.