Home > Bacteria & the Skin > What is Scalded Baby Syndrome? 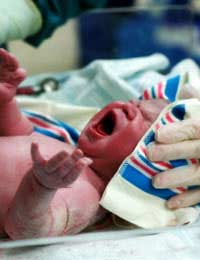 Scalded baby syndrome is a rare condition that affects newborn babies, but it can occur in children up to the age of 5 years. It is caused by a bacterial infection under the skin that starts in the first few days of life. The appearance of an affected baby is horrific. It literally looks as though someone has dropped it into scalding water, and the burns all over its body have caused its skin to peel off. However, fortunately, the condition looks much worse than it actually is and few babies die from scalded baby syndrome

Does it Have Other Names?

What Bacteria Cause SSS?

Staphylococcus aureus is the main culprit. Strains of S. aureus produce highly active toxins that travel through the body but affect the upper layer of skin, causing it to slough away much faster than it should. Two specific toxins called epidermolytic toxins A and B have been identified. As the toxins act to separate individual skin cells, the skin structure begins to break down. Great sheets of skin peel away, leaving the exposed lower layers of skin red and weeping. The skin is very tender and babies also tend to have a fever.

In one of the largest outbreaks of SSS ever recorded, doctors at a hospital in Jersey City in New Jersey in the USA described the condition in 68 newborn babies over a period of 115 days in the spring of 1980. Most of them were from the same strain of S. aureus, suggesting some sort of link. In addition to treating the infections successfully with rehydration therapy, supportive therapy and antibiotics, the hospital also completely closed the affected ward for a period of six weeks and repeatedly scrubbed and cleaned it. The ward was only reopened after redecoration, and tests that showed no evidence of the strain of S. aureus that had caused the outbreak.

One case has been recorded where an SSS-like illness occurred in a 9-day old baby but was caused by another bacterium, Pseudomonas putida. This bacterium caused a more virulent infection and, despite receiving supportive care and prompt antibiotic treatment, this baby did die in 2004.

Is SSS More Common in Boys?

Previous studies of outbreaks of SSS, which have been much smaller, have shown that 5 times as many boy babies succumbed to SSS as girls. Questions have been raised about this and it has been suggested that the practice of circumcision could be responsible. A cut in the foreskin in the babies at just a few days old could be the site at which the Staphylococcus bacteria managed to gain entry to the body. An analysis of the outbreak that affected 68 babies in 1980 did not support this theory. They found that the SSS there affected boys and girls equally, and the infection was more likely to have gained entry to the body via the umbilical cord wound, which was still fresh.

SSS is a very rare condition and only the usual hygienic precautions are necessary in ordinary circumstances. However, if an outbreak of SSS is in progress at a maternity hospital or hospital ward, special precautions have to be taken. Every person working in the institution must be tested to see if they are carrying a strain of S. aureus that could be responsible. Even the strains that carry the dangerous exotoxins can be carried as commensal bacteria by healthy adults, and can be passed on without realising.

Once the person is identified, they can be treated with antibiotics to stop them being a carrier. The wards should then be completely cleaned to avoid further exposure. Very strict handwashing is also necessary in the meantime to prevent potential infection spreading from person to person.