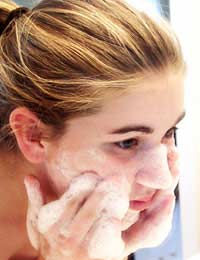 Everyone suffers from the occasional spot, pimple or blackhead, probably without thinking too much about what causes them. Teenagers, who tend to suffer a lot of spots because their skin is affected by the hormonal changes that are happening in their bodies, become more focused on the underlying cause – bacteria. Their use of anti-bacterial face washes and creams is higher than any other age group.

What is a Spot?

A spot is basically a swollen and infected hair follicle. The skin has many hair follicles all over its surface layer, not just in areas where hairs are thick and obvious. The skin on the face has many very fine hairs and so many small hair follicles. During childhood, the skin on the face is clear and smooth for the most part. When puberty begins, the sex hormones increase in the body with several effects. One is to cause overproduction of a fatty substance called sebum in the skin. Normally, this acts as a helpful lubricant to keep the skin soft but if too much is produced, it can easily block the fine hair follicles.

The blockage traps bacteria in the bottom of the hair follicle. The bacteria are the friendly bacteria that live all over the skin but, when trapped, they become rather less friendly. Many spots are caused by Staphylococcus aureus. As the pressure in the hair follicle builds up, it becomes inflamed and the bacteria start to invade the outer layer of cells, causing an active infection. This produces dead cells and pus, increasing the pressure even more. Eventually, the pus is forced outwards, forming the familiar white or yellow head to the reddened area of skin that has developed around the hair follicle.

What is a Boil?

A boil is the same as a spot but instead of only involving one hair follicle, the infection that causes a boil extends to several hair follicles over a much wider area of skin. The area can become quite painful with a sizeable swelling and lots of pus. A very large boil, or several boils close together is called a carbuncle. When the infection also becomes deep seated in the skin, an abscess forms. Medical treatment is usually required for these more serious skin eruptions.

The very worst thing to do with a spot is to pick it, as every parent tells a teenager. This introduces more bacteria and makes the spot more infected.

Keeping the skin clean is a good idea, but overuse of anti-bacterial products is not always a good thing. This reduces the ability of the skin to fight off infection, and strips the skin of all of its natural sebum and oils.

For teenagers who have many spots for several months – a condition usually called acne – medical treatment using medicines that decrease sebum production, or with antibiotics may be necessary. However, this is only usually done in cases where the facial skin is in danger of becoming heavily scarred, something that occurs in only a small percentage of adolescents.

Plants Get Spots Too

Many of the plants we depend on for food also get spots that are caused by bacteria. Tomato plants and pepper plants get a vegetable disease caused by the bacterial species Xanthomonas campestris. This infects the plants and causes very obvious spots on the leaves and also on the fruits, making the tomatoes and peppers inedible.

Unlike spots in humans, spot diseases in plants are highly contagious and can spread through a crop in a garden or a greenhouse very rapidly, particularly when the weather is wet and humid. The bacteria responsible have long whip-like flagellae that make them very good at swimming and they can travel all over the surface water on the plant, setting up infections that cause the spots.