Home > Bacteria & the Skin > What is Gangrene? 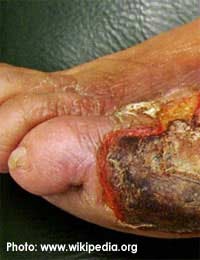 There are different types of gangrene but this medical condition is basically death of tissue on a living body. It occurs usually in the fingers or toes, although gangrene can spread up the limbs from these extremities, or it can occur in internal organs. It is caused when not enough oxygenated blood can gain access to the tissues, a condition known as ischaemia, or when bacteria are introduced deep into the tissues, by a car accident or a war wound, for example.

The lack of oxygen means that cells rapidly start to die, as they cannot carry out aerobic respiration. As large parts of the tissue such as muscle die, these start to decay, providing an ideal environment for some very harmful bacteria. Serious infection is the inevitable result.

In dry gangrene, a poor blood supply leads to tissue death, usually in the toes of an elderly person with severely blocked arteries due to arteriosclerosis. People with very poorly controlled diabetes, whose circulation is poor, can also be at risk of dry gangrene. The affected tissue is quite dry and leathery to the touch, almost as if it has been mummified. Bacteria set up infection in the area, and use ruptured blood cells for nourishment, producing hydrogen sulphide from the haemoglobin. Hydrogen sulphide is black, and this colours the skin.

Wet gangrene occurs in different parts of the body – it is more common in areas that are normally moist, such as in the mouth, lungs or colon and is frequently associated with cancerous tumours. People who develop bedsores after lying in a hospital bed for days or weeks at a time can develop wet gangrene in these open sores. Wet gangrene smells very bad because of the bacteria that infect the tissue.

Gas gangrene is the third type of gangrene. It occurs primarily because of a bacterial infection by Clostridium welchii, Clostridium septicum or Clostridium oedmatiens, all of which produce alpha toxin. Bacteroides bacteria and Streptococcal species that grow best in anaerobic conditions can also be involved. The infection can be introduced by a wound or deep cut but the person affected doesn’t always have to have a circulatory problem. Soldiers in wars who are injured and have no access to medical treatment suffer from gas gangrene as a result of infected wounds. People suffering from colon cancer can also develop it because of the damage to their large intestine that is caused by the growing tumour. Infection is inevitable because of the large number of bacteria present in the intestine.

As the bacteria grow, they release toxins into the surrounding tissue, which destroys it rapidly. The rate of decomposition is similar to that seen in a dead body, and the gases produced are those of putrefaction.

Once tissue has died, an important part of treatment for any type of gangrene is amputation of the decaying tissue. This prevents the infection that is present from spreading. In the case of dry and wet gangrene, the underlying cause of the interrupted circulation also needs to be treated, with operations to clear arteries or provide an alternative blood supply. Antibiotic treatment is also necessary, and needs to be effective against all of the bacteria involved. Gas gangrene is probably the most dangerous form of gangrene as it can spread very quickly, causing death, so needs emergency treatment.

As with nectrotizing fasciitis, such an acute bacterial infection on such a large scale also causes toxic shock syndrome in patients with large areas of gangrene. This requires intensive supportive care with rehydration therapy and monitoring to watch out for signs of multi-organ failure.

As many of the bacteria involved in gangrene grow best in anaerobic conditions, a therapy that is often used involves giving the patient hyperbaric oxygen, something usually used to treat decompression sickness in divers. In gangrene patients, this therapy increases the amount of oxygen in the blood, driving oxygen into the affected tissues and providing conditions that are toxic to the anaerobic bacteria at the heart of the gangrene lesion. This can provide a severely ill victim of gangrene with an improved chance of survival.