Home > Introducing Bacteria > How and When Were Bacteria Discovered?

How and When Were Bacteria Discovered? 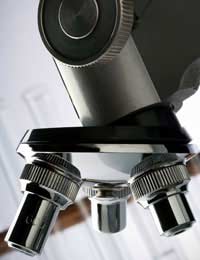 Anton van Leeuwenhoek, a Dutch cloth merchant, was the first person to see bacteria. During the 1660s he started to grind glass lenses to make better magnifying lenses so he could examine the weave of cloth more easily. He excelled at lens grinding and achieved magnifications up to 500 times lifesize. It is not recorded why he decided to use his best lens to look at a sample of pond water, but he did, and saw that it was teeming with tiny living things.

Leeuwenhoek sent a report of his sightings of bacteria and algae to the Royal Society in London in the late 1670s with many detailed drawings. These still exist today and it is obvious that, as well as algae and other single-celled plants and animals, he also saw some of the larger bacteria.

For almost two centuries, the knowledge that the world teemed with small organisms was regarded as an interesting but rather irrelevant fact. It was a long time before people worked out that bacteria could be a factor in causing some of the diseases that passed from one person to another.

The Work of Semmelweis

The germ theory of disease was not really fully developed until the 1870s but, 30 years before this, a doctor in Vienna called Ignaz Semmelweis made a discovery that was very important but not accepted at all at the time. Semmelweis worked in a maternity hospital where the death rate of mothers and babies was extremely high because of an infection commonly known as child bed fever or puerperal fever. However, Semmelweis quickly made a very unpopular observation; he noticed that the ward run by midwives had a much lower death rate than a ward run by doctors.

At that time, doctors went from one patient to another without washing their hands, so the bacteria that caused child bed fever were transmitted easily around the ward. Semmelweis’ suggestion that doctors cleaned up between patients, and wore clean coats for the ward and different clothing for the room where post mortems were carried out achieved a huge drop in death rates. However, his claim that the doctors were doing a worse job than the midwives led to him being shunned by his colleagues and dismissed from his position.

After getting another job in another hospital, and making the same observations and improvements, Semmelweis was again heavily criticised and lost his job. He died in 1865 in a mental institution, widely regarded as a madman, and never lived to see the theory that tiny particles, invisible to the naked eye, could carry infectious disease from person to person.

The conclusive proof was obtained by several scientists, but the most crucial evidence came from the work of Louis Pasteur and Robert Koch in the 1860s and 1870s. Pasteur showed that microorganisms grew in broth in a sealed tube, but no growth or spoiling of the broth occurred if it was boiled first. Boiling killed the bacteria and other microorganisms and the process or boiling to keep food fresh is still called pasteurisation. Robert Koch demonstrated that the disease anthrax was caused by a bacterium. His basic criteria that proved the germ theory are now called Koch’s postulates and are still used today as a check list for proving that an infectious agent actually causes a specific disease.

Acceptance of the Germ Theory of Disease

The germ theory of disease explained the observations of an English doctor, John Snow, who proposed a theory that a ‘miasma’ or cloud of infection could explain how cholera epidemic in London in the 1850s could spread. He thought that the invisible force got into the water and was spread as people used water contaminated with sewage for drinking and cooking. During the latter part of the 19th century, the theory was widely accepted and better sewerage and water systems were introduced, and more sanitary methods became usual in hospitals. Joseph Lister developed antiseptics and showed that their use in operations could prevent the many infections seen in early surgery.

Many different scientists and researchers studied individual species of bacteria using more powerful microscopes and observing the diseases they caused. Antibiotics such as penicillin, first developed by Alexander Fleming, Ernst Chain and Howard Florey in the 1940s, have saved many lives, although many bacteria have since become antibiotic resistant. Although we now know the entire genome sequence of many different species of bacteria, and we understand how they interact with body cells and tissues to cause disease, bacteria still often get the upperhand. There is much still to learn.

Bacteria and Evolution
Share Your Story, Join the Discussion or Seek Advice..
[Add a Comment]
It is a good book...... I enjoied by reading thisssss.........
Shubham - 6-Jul-17 @ 8:20 AM
Edi G we probily should especially for what it says in the last book
r2k - 8-Apr-17 @ 11:02 PM
Sarbear12345 - Your Question:
Really enjoyed reading this, IT WAS THE BEST EVER!!!!
Our Response:
We are glad it helped.
TypesOfBacteria - 20-Jun-16 @ 2:48 PM
Really enjoyed reading this, IT WAS THE BEST EVER!!!!
Sarbear12345 - 19-Jun-16 @ 11:56 PM
its so beautifull and insteresting im from phillipines and its really helpful to me to my report on january 28 2016
chay chay - 27-Jan-16 @ 10:12 AM
Really interesting, full of information that is helpful to what I am studying. Will come back to website a little later.
K.A.McGuire - 3-Jan-16 @ 2:34 PM
this page gave me lot of information through which i gain so many points about bacteria and its discovery for this i am thankful to this group. I want to ask one question about the kingdoms, two kingdom system,five kingdom system?
princess - 12-Oct-14 @ 7:45 AM
Your pages r fabulous. they really increase my knowledge.
WALI - 18-Nov-12 @ 2:44 PM
i have a feedback. whatever it is written is always found helpful to me but the info is not 2 the point. it should be more on the topis displayed on the webpage.
dabzzz - 25-Oct-12 @ 5:01 PM
It should be noted that John Snow did not believe in the miasma theory but the oposing contagion theory and that is what helped him to make the conclusions about how cholera was spread. This consequently led to the development of modern epidemiology. In fact he had many scientific debates with his colleagues who were followers of the miasma theory.
SE - 30-Oct-11 @ 6:01 PM
Well said Vickie, most modern "Discoveries" were indeed presented in the Book most don't read today. Paths in the Oceans, Sperical Earth, Hydration Cycle, Gravity, Time, Physics, seasons, farming, light, heat Etc. Maybe we should take the bible a little more seriously.Cheers, Edi
Edi G - 8-May-11 @ 6:05 AM
Semmelweis was shunned mostly because he took his theories from the BIBLE. He stated correctly that the Bible teaches you to wash your hands under running water after handling dead. (NUMBERS 19:11-22) The Bible taught that you were "unclean" after touching the dead and it told you exactly what to do to become clean. He was mocked because he taught theories that were thousands of years old. Of course, today, we still follow those basic rules taught in the Bible when handling the dead.Incidently, I'm a retired nurse and I first heard the story of Semmelweis from my Microbiology teacher when I was in college.
vickie burns - 4-May-11 @ 6:50 PM
Title:
(never shown)
Firstname:
(never shown)
Surname:
(never shown)
Email:
(never shown)
Nickname:
(shown)
Comment:
Validate: