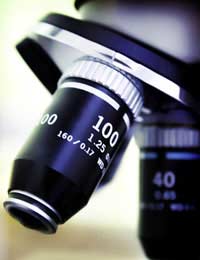 Bacteria are too small to see individual bacterial cells with the naked eye. Before the invention of microscopes in the renaissance in Europe, people did not understand what caused infections. It took a great deal of time and debate before the germ theory of disease was accepted in the 1900s, and into the 20th century before people realised that infections could be caused by viruses and fungi as well as by bacteria.

Looking at Bacteria with a Light Microscope

Most children at school get to use a microscope but to look at plant and animal tissue, rather than bacterial cells. This is partly a safety issue but it is mainly also to do with the lack of proper equipment in schools. Growing pure cultures of bacteria needs special sterile techniques and incubators, which most schools don’t have. The first sight of bacteria that most biology students have is at university.

Bacteria taken directly from an agar plate or culture where they have been grown are still relatively invisible. Staining techniques are used to make the colourless bacteria show up and the light microscope can show whether a bacterium is a coccus – a cell that is spherical, or a bacillus, a rod shape. Different stains can also show whether the bacterium has a capsule or not. This can be important because bacteria that do have a capsule tend to be more virulent. The Neisseria meningitides, the bacterium that causes some types of meningitis has a particularly thick capsule and this protects it from the human immune system.

Bacteria can be stained to show whether they are gram positive or gram negative, using the Gram stain. This is a simple test to do and knowing this helps doctors to decide how to treat the bacterial infection. Some antibiotics are not effective against both types.

Seeing Bacteria with the Electron Microscope

The invention of the electron microscope in the mid 20th century was a major step forward in the science of microscopy. It enabled scientists to view bacterial cells in much more detail than ever before, showing that they had a cell wall, a cell membrane and an internal bundle of DNA. It also identified other internal structures such as storage vacuoles and external structures such as flagellae and pili. Pili are particularly significant as these are the tiny tubes that bacteria use to pass genetic information to each other. This restrained form of bacterial sex is actually very dangerous to us – it enables bacteria to pass across antibiotic resistance genes, allowing antibiotic resistance to spread very quickly between bacteria of the same species, and sometimes to other species.

For non-scientists the most impressive way to look at bacteria is to use a scanning electron microscope. This does not look at the inside of the bacteria, at its molecules or internal structures. It scans the surface of the bacterium, producing intricate three dimensional images that show what a bacterium would look like in close up if you were actually smaller than it is. Various colour enhancement techniques are used to generate the photographs and images to make them even more striking. Bacteria are not usually bright purple or red, but the result gives a very accurate and meaningful impression of bacteria that cannot be obtained in any other way.
Next Page