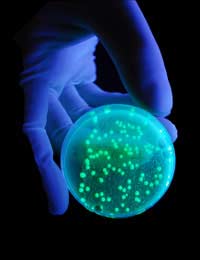 Bacteria are primitive, single-celled life forms that originated very early in the history of life on Earth. Current theories suggest that as the Earth cooled, a series of complex chemical reactions started to occur in the water that formed. Over millions of years, the basic chemicals of life, proteins and nucleic acids, started to appear. Eventually these molecules collected together in the form of simple cells that were very similar to the bacteria of today.

Both main types of bacteria, the cyanobacteria and the non-photosynthetic bacteria have continued to evolve in the millions of years since, but their overall structure has not changed a great deal. Bacteria are able to respond quickly to changes in their environment, which allows them to colonise many different environments and habitats very successfully. However, one of the most interesting aspects of bacteria and evolution is the role that these simple organisms have played in the development of more complex life – plants and animals.

The cyanobacteria, which evolved early in Earth's living history, carried out the process of photosynthesis. They could use carbon dioxide and water to make sugars and other simple nutrient molecules, which they could use as energy sources to live, grow and reproduce. A by-product of this process was oxygen gas, which was released into the atmosphere. Because of the activity of these early photosynthetic bacteria, the Earth's atmosphere now contains around 20% oxygen and many living things, including humans, depend on it.

Although cyanobacteria are still around today, some of them did not remain free-living. They formed symbiotic relationships, mutually helpful associations, with larger cells and became embedded within their cytoplasm, like parasites. The internal cyanobacteria carried on photosynthesising, providing the host cell with nutrients, while the host cell protected the cyanobacteria from the external environment. Many experts think that this is where the chloroplasts in plant cells came from. Chloroplasts in higher plants are now cell organelles that cannot survive on their own.

Just as chloroplasts are thought to have developed from cyanobacteria over millions of years, some of the bacteria that carry out aerobic respiration are also thought to have become internalised into plant and animal cells.

Aerobic respiration is essentially the opposite biochemical process to photosynthesis. Oxygen is used to power the process by which sugars such as glucose are split into carbon dioxide and water, releasing large amounts of energy that can be used by the cell. Most bacteria still respire aerobically, although a few have evolved to live well without oxygen, using the process of anaerobic respiration. All types of fermentation, whether to make beer, wine, yoghurt or bread, depends on anaerobic respiration.

At around the same time that cyanobacteria were being engulfed by larger cells and starting the long evolution into chloroplasts, aerobic bacteria taken into larger cells began their transformation into mitochondria. These tiny organelles are found in all living plant and animal cells, where they carry out the metabolic processes that release energy.

The idea that the chloroplasts and mitochondria, organelles found in the cells of plants and animals, were originally free-living bacteria is known as the endosymbiont theory of organelle evolution. It is now widely accepted, but was thought astonishing when first proposed in 1905. It was made very popular in the 1980s by Lynn Margulis, an American bacteriologist.

One of the main pieces of evidence for the theory is that both chloroplasts and mitochondria have their own DNA, which is nothing to do with the DNA of the nucleus of the cell. Both chloroplast DNA and mitochondrial DNA is present in small circles, just like the genome and plasmids of free-living bacteria. It is also passed down to daughter cells directly, by division of the organelles.

Mitochondria and Our Past

One unexpected application of the discovery of mitochondrial DNA, which is passed down only from a mother to her children, is the proposal that the sequences in this DNA can be used to trace our ethnic ancestry back to a small number of women who lived thousands or even hundreds of thousands of years ago. They have been termed the Daughters of Eve by scientist Brian Sykes, and he proposes that all humans alive today have a common female ancestor – Mitochondrial Eve.