Home > Dangerous Bacteria > Is Tetanus the Same as Lock-jaw?

Is Tetanus the Same as Lock-jaw? 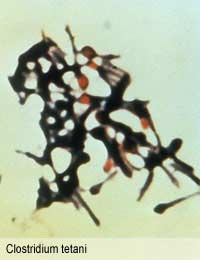 Tetanus is the same disease as lockjaw; the first term is the more technical medical description, lockjaw is a more every-day layman’s term. Both describe the effects of an infection with the bacterium Clostridium tetani, which produces a neurotoxin that causes severe muscle contractions. When it affects the muscles of the jaw, neck and face, the result is, literally, a locked jaw. The person affected cannot open their jaw or swallow and they have a permanent fixed wide grin. Other muscle spasms also occur and can involve the whole body.

Clostridium tetani gets into the body through a wound in the skin. This usually involves a fairly deep puncture wound. Deep cat or dog or other animal bites carry a high risk of tetanus and are quite commonly sustained, which is why regular anti-tetanus vaccinations are a good idea. However, if someone is bitten by a dog and he or she is either unvaccinated, passive immunisation with an anti-tetanus toxin antibody is still able to protect against infection.

Tetanus is not a contagious infection – it does not pass between people. It develops only after sustaining a wound, when this is infected with Clostridium tetani bacteria.

The Bacteria That Causes Tetanus

Clostridium tetani is a rod shaped bacterium that has one slightly wider end, so that it looks like a match under the microscope. It is a bacterium that grows only in conditions where there is no oxygen; it is an obligate anaerobe. The swollen tips visible on one end of the bacterium is actually an endospores, a very resistant spore that allow it to survive in a dormant state for long periods of time. As endospores, Clostridium bacteria are able to withstand high temperatures and most antiseptics.

The bacterium is widely spread in the environment and is common on objects found in the soil. A perfect place for C. tetani endospores to survive is on a rusty nail. The crevices in the rusty surface are perfect to prevent it being washed away and it is present on the ideal tool for introduction into the human body. Countless cases of tetanus have resulted from someone standing on an upturned rusty nail, so sustaining a deep puncture wound laced with Clostridium endospores. These are driven deep into the tissue, where the environment is anaerobic. The spores quickly reactivate and bacterial growth begins.

Another ideal route of entry to the body is via the needle on a hypodermic syringe and there are documented cases of contaminated heroin causing tetanus in drug users.

The main toxin produced by Clostridium tetani is tetanospasmin. This is extremely powerful and a dose of just 175 nanograms is able to kill an adult man. Doses much lower than this can cause the severe muscle contracts seen in tetanus.

Bacteria that carry the gene to make tetanospasmin do so on a bacterial plasmid that is completely separate from their main genomic DNA. This means that the gene and therefore the ability to make tetanus toxin can be passed from one bacterium to another when plasmids are exchanged.

Tetanospasmin acts on nerves at different points within the central nervous system. It acts in the brain and spinal cord, in nerves in the peripheral nervous system and on nerves that are part of the sympathetic nervous system. This controls the heart and respiratory system and other automatic functions in the body. The action of the toxin is complex but, essentially, it blocks inhibitory impulses across nerves, causing only positive signals to pass. This causes spasms because only messages telling the muscles to contract get through, the messages telling the muscle to relax are blocked by the toxin.

Most people in the UK will not get tetanus as children are vaccinated against this disease, as well as diphtheria and whooping cough, in the first few months of life. Regular boosters are then given throughout life, or whenever someone sustains an injury and they are thought to be at risk. Any cases of wounds in people who are unvaccinated are treated with an antibiotic and/or anti-toxin therapy. It is recommended that people who start to show symptoms of tetanus are not given penicillin, as this splits open the bacterial cells and causes more toxin to be released all at one time, causing a worsening of the muscle spasms. Metronidazole is usually prescribed instead, as this stops the bacteria dividing, but does not lyse them.