Home > Bacteria & the Gut > Shigella in the Developing World 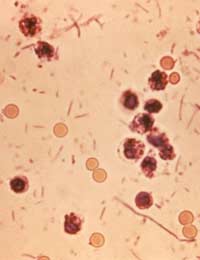 Shigella is a bacterium that causes severe a food-borne disease known as bacillary dysentery. It occurs all over the world. For example around 10% of all cases of severe food poisoning that are reported in the United States. However, its impact on the developing world is far greater. Shigella is responsible for 165 million of dysentery in developing countries annually, with around one per cent of those affected dying from their illness.

That means one million deaths each year, with most fatal cases occurring in children. The illness is passed on by drinking contaminated water, of food that has been prepared using contaminated water, such as salads, seafoods and vegetables. In very poor areas of the world, which have no sanitation and a very poorly regulated water supply, this can result in large epidemics affecting thousands of people.

Bacillary dysentery, as caused by Shigella, is different to amoebic dysentery, which is a disease with very similar symptoms, but which is due to an infection by Entamoeba histolytica. This is a single-celled organism that is a parasitic pathogen of humans. Other bacterial species, namely Salmonella enterica and bacteria belonging to several species of Campylobacter can also cause dysentery.

The symptoms of dysentery are the same in both cases. Infection of the digestive system causes severe liquid diarrhoea and the production of large amounts of mucus and blood in the faecal matter. The affected person also feels very ill, nauseous and sometimes vomits. If a lot of body water is lost, very severe dehydration can occur very quickly.

The symptoms are caused by the Shigella bacterium secreting lytic proteins into the cells that line the digestive system, disrupting their membranes. As the lining of the intestine breaks down, the bacteria can invade new cells. Within a couple of days, the epithelial cells lining the bottom of the large intestine and the rectum have been destroyed. This tissue damage explains the blood and mucus in the faeces. Some strains of Shigella produce powerful toxins that complicate the dysentery further, causing kidney problems.

Poor sanitation in the developing world may be due to economic hardship, but it can also occur in times of conflict and as a result of natural disasters. Large numbers of people can become displaced to refugee camps with inadequate water supplies and no clean areas to prepare food. Large pandemics of bacillary dysentery have been common in sub-Saharan Africa, South East Asia and Central America since the 1960s. One of the worst was seen in Rwanda in 1994. Twenty thousand refugees fleeing the country to Zaire died during one month due to a strain of Shigella that had become resistant to all the antibiotics that were available.

Approximately 22 million people were known to be living with HIV in sub-Saharan Africa in 2007. Because HIV affects the immune system, people who are HIV positive or who have AIDS are less able to fight off other infections, and this has increased the death rate due to Shigella infections in Africa.

The loss of body water and the subsequent dehydration is the element of dysentery that causes death, particularly in children. Treatment therefore involves prompt replacement of body fluids either by drinking, or by introducing fluids directly into the vein, and supportive care if this can be made available. In developing countries and refugee camps, this is not really an option, but sachets of oral rehydration therapy have saved many lives over the last 30 years. The charity UNICEF gives out 60 million packs every year to families in the developing world to prevent death by dehydration, whether the cause is dysentery or another diarrhoeal disease. The number of children dying of dehydration between 1980 and 2000 was reduced from 4.6 million to 1.8 million, just by this simple healthcare strategy.

Supplementary therapy with antibiotics can also be used with oral rehydration to speed recovery.